Through design and manufacturing we help architects, entrepreneurs, and builders create unique, durable, and sustainable facades. As a leading GRC cladding manufacturer we work with everybody from one-man entrepreneurs to the most recognised architects and builders. Our projects range from larger builds such as apartment complexes and high-rises to smaller assignments of balcony elements and sills.

We produce durable, lightweight, and formable GRC architectural cladding elements for both new constructions and renovation projects. All elements are custom-made and uniquely designed to fit your project. You have a large range of possibilities in terms of surface, pattern, colour, and finish.

Sustainability is of great importance to us which is evident in both our products and production. We have an environmentally friendly production with a low consumption of energy and GRC itself is a sustainable and durable material. This also makes it ideal if you are planning on having your project environmentally certified.

BB fiberbeton is verified as a Full Member of the international trade association GRCA. Our status as a Full Member means that we have sufficient resources in our plant, equipment, and labour to consistently design and manufacture high quality GRC. We also have quality management systems and production controls in place to comply with the requirements of the GRCA Specification, Method of Testing and Practical Design Guide. This also entails a yearly external control of whether we are upholding the highest quality requirements for our production.

CEO Simon Hertzum has been part of GRCA since 2016 and is currently Chairman of Council. Read more about GRCA

We always strive to be solution oriented, to act as a unity, and be decent and honest. The core of BB fiberbeton is quality and development. We are driven by continuous development

Where it all started

Shortly after WWII in the late 1940's, Aage Brandt started trading Nexo sandstone from his home island of Bornholm in Denmark. Later, he began trading natural stones from Sweden, Portugal, and Norway as well. Eventually, the business grew into Brandt Beton A/S which produced concrete product for larger plants and gardens. Most notably, Brandt Beton created and produced the hexagonal Bellahøj-stone, and constructed the first semi automated machine for producing pavement tiles.

Brandt Beton A/S was taken over by his son, Ole Brandt, and in the 1970’s Ole Brandt received samples of GRC – at the time, a brand new material. This sparked a great entrepreneurial spirit and Ole Brandt had a vision of building a sailboat out of GRC without steel reinforcement. The boat building began in 1976 and in 1984 the 38-feet Signe-38 sailboat - Signe after his firstborn - was finished.. The sailboat was named Elvira and sailed around Scandinavia for 25 years. Thus, Ole Brandt became the first in Denmark to use glass fibres as reinforcement in concrete on a larger scale and this experiment paved the way for GRC as a building material in Denmark.

“If he dares to sail a boat in that material, I can put it on my house”

The first commercial projects were produced in 1979 and consisted of facade cladding and balcony parapets. In the beginning, experiments included a range of fibres including glass, polypropylene, carbon, and steel. After a few years, it was determined that glass fibres were the most promising. Working with GRC was still new and testing the boundaries by producing prototypes of ashtrays, dog kennels, rubbish containers, and garden figures was part of the process. 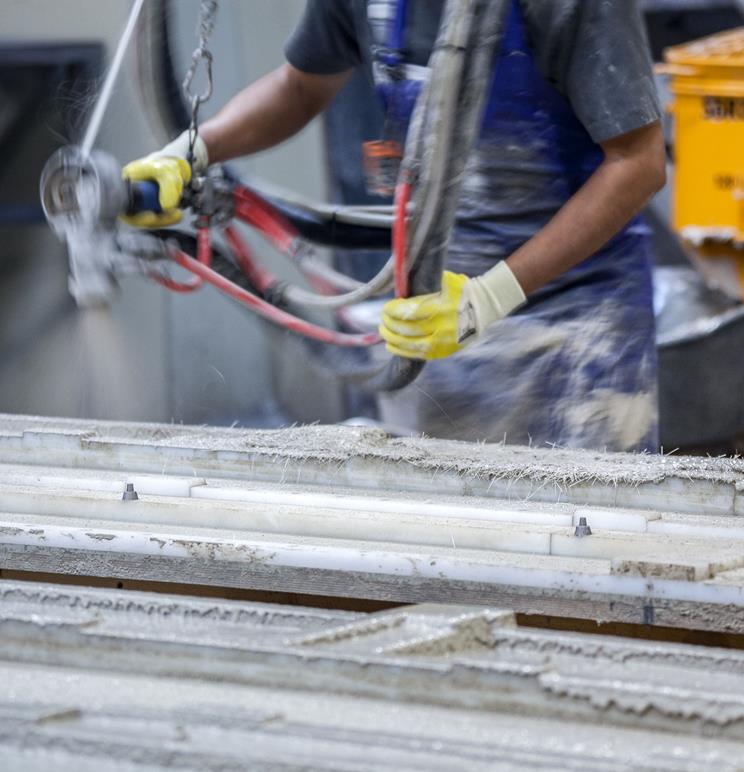 The establishment of BB fiberbeton A/S

In 1984, BB fiberbeton A/S was established in order to accommodate the rising demand for GRC. The BB derived from Brandt Beton, but otherwise clearly distinguished from the production of concrete products. Over the following years, Ole Brandt focused all his time and energy in BB fiberbeton and the GRC industry, and eventually sold off Brandt Beton A/S. Steen Eriksen joined as CEO allowing Ole Brandt to focus on sales and development. Ole Brandt and Steen Eriksen ran the company together for 20 years.

The next generation takes over

Expanding to the UK

In 2021, BB fiberbeton joined forces with two British GRC companies, Syntec GRC and Synergies Moulds. This merger consolidated the position of BB fiberbeton as the leading GRC supplier and manufacturer in Europe, now with production locations in both Denmark and the United Kingdom. This merger is the start of a collaboration of three companies that all are well-versed in the GRC industry and bring a wealth of competence and innovation. 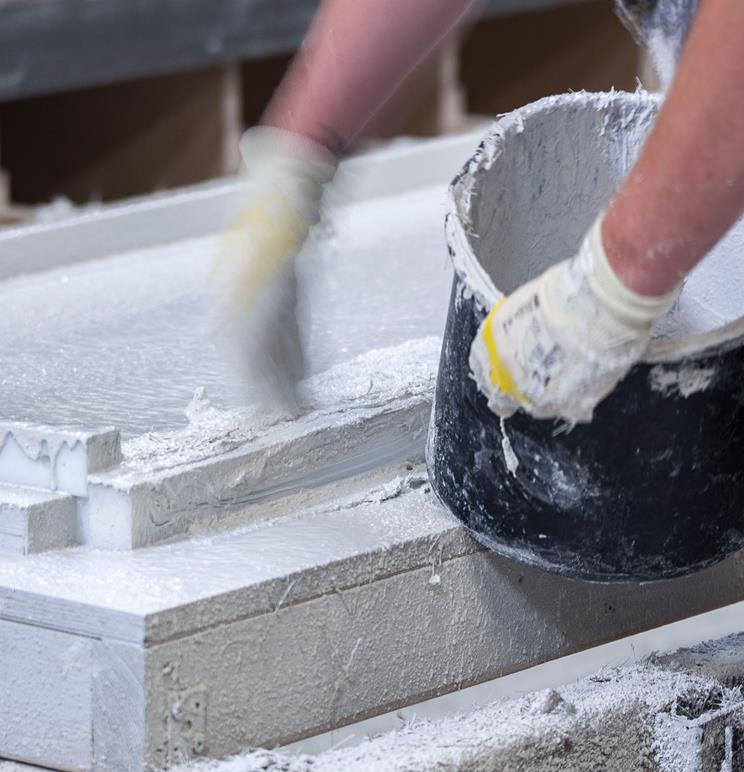 We use the spraying technique for our GRC elements, allowing for a low water/cement-ratio, low thickness, and high strength. This technique requires a great deal of craftmanship.

Founder Ole Brandt in front of the factory in Lille Skensved, Denmark.

In 2017 and 2018 we won the Børsen Gazelle. This prize showcases our growth over recent years and we are proud to be a part of the distinguished Børsen Gazelles - companies who can act as role models for optimism, creativity, and job creation.

In 2019 we won the CSR People Prize, an award given out the companies who make an extraordinary effort to take a social responsibility. It is an award given to companies who see potential in people posed at the edges of the labour market and thus contribute to fulling the 8th UN World Goal of decent work and economic growth.

In 2021 we support Danske Hospital Klovne.

This non-profit organisation of hospital clowns brings joy and laughter to hospitalised children in Danish hospitals. These clowns create a safe and positive experience for the children and help transform the hospital rooms into a more fun and secure environment. They bring smiles to the children during a difficult time in their life.